Late in January of 1999, I bought my first computer. It was a Sony Vaio, a laptop of course. I knew I wanted one when I saw the first advertisement in a United Airlines inflight magazine. So slick, so beautiful, so advanced. Beauty came at a price, though, payable in dollars and performance. I agonized long and hard about how to compromise. In the end, I chose a computer that wasn't quite as thin as I would have liked but powerful enough and affordable on a graduate student stipend. I went to an auction site, now long defunct, made one bid, won, and hoped for the best. Given that I write this post from that computer, it's fair to say that the best has come to pass.

The computer claimed to be refurbished. There's still a tag on the back to prove it. But much to my delight it was brand new, untouched by greasy hands, unfondled. Perhaps half a year behind the bleeding edge of technology, but still one of very few at that time to have a DVD drive. It became thus my first home entertainment system. As it didn't have a network port, I had to buy an external card to do the job. Wireless only appeared several years later.

The computer ran a rotation of operating systems until progress came to a halt in 2004 with Red Hat 9. I had almost got through graduate school when the limitations of my beloved machine became too crippling. That's when a ThinkPad entered my life, redefining slick, cool and powerful. The ThinkPad is gone now. It lasted only six years, replaced in its waning days by a Macbook Pro, a tool for serious work. Lighter stuff quite literally, is the domain of my little Eee.

There was no reason to blow the dust off the Vaio and put it back on the lap, but last night it happened. I guess I just wanted to see how it was doing. I booted it up, logged on, fired up StarOffice and started writing what's now turning into a post, as if time had stood still. The computer is still a looker. It's reasonably thin, the screen is bright and fills the lid almost entirely. It's also almost completely silent; there probably isn't enough power in the old CPU to drive the fan.

Office works like on the first day, but most websites are off-limits because of flash or complex javascript applications that the old browser can't handle. I like it because it keeps me focused. It is as if the wider internet didn't exist. Maybe I'll upgrade it to a typewriter for general writing. In any case, happy 12th birthday, faithful companion! 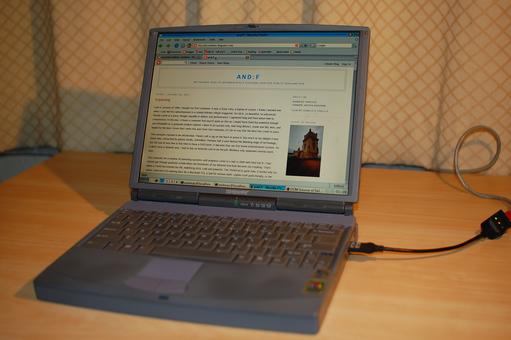