the pleasure of rain

Out of the seven days I spent in Rome last week, it rained on three. This was a blessing in disguise, and not even very well disguised. I stayed with a friend outside of Rome, and when I ventured into town for the first time three days into my little vacation, rain had cleaned the air so diligently that the dust, dirt and fumes that Rome is notorious for were nowhere to be seen or smelled. It was a pleasure just strolling around and being impressed.

It was an equal pleasure snapping pictures because, even though the rain had disappeared, the clouds were only slow to follow. I enjoyed most marvelous sky and light. And I was painfully aware what an inadequate tool a little digi-cam is for taking serious pictures. 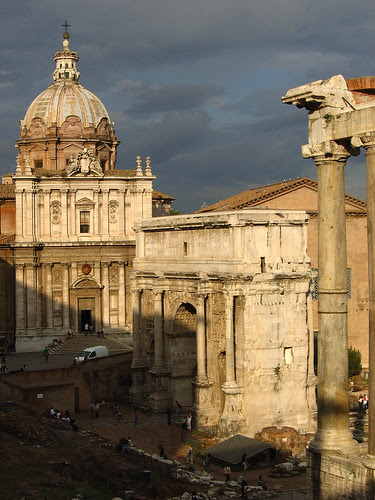 Two years ago I spend about $300 for a small Canon, an amazing little gadget, great for taking tons of snapshots and good for an occasional photograph as well. But it is not satisfying as a main camera because:

The N8008 and two prime lenses, a 28mm and a 50mm, that I used to own (before I sold it when I couldn't carry it out of the US because my bags were too full already) combined into a system that left little to be desired. The 50mm lens in particular amazed me every time I used it. I would look at something and think, hey, this would make for a nice picture, and as if by magic, my lens would capture it just right. It really improves your pictures when you don't dig around with a zoom.

Now that I'm deprived of a good thing, I'm pathologically salivating every time I read a report about digital SLRs. Today was such a day. Philip Greenspun has published an article on how to build a digital SLR system on photo.net. $1200 get you into the game, but you'll probably need twice as much if you want to add a wide-angle lens and a tripod.

The problem is, if I actually break down and buy something useful, I'd have no excuse for taking shitty pictures. And I'd have to go to places where it rains to find the right light.

I'm sitting at home hitting my head with a big wooden mallet, inflicting pain onto myself to show how much I repent my sins, much like the flagellates did in the Middle Ages, only I'm taking it more seriously. Today I went to the Alliance Française for the first time. I thought it was about time I finally learned some French, after eighteen months of being deaf, dumb and mute, and the Alliance is the place to go. They offer courses, gatherings and the like.

Before the hard work can start, one has to undergo a test to assess one's abilities. After much sweating, flailing and winging, I was attested the language proficiency level of "avancé superieur anterieur sur-composé" or some such thing, almost falling off the sheet. The friendly elderly gentlement manning the triage ward told me I shouldn't bother with a regular course because I'd bore myself to death.

Now I have to say that I don't mind a little sacrifice here or there, especially if it finally gets me to learn some French. But there was no arguing with him. Not even the prospect of several hundred euros tuition made him change his mind. He was resolute in insisting I should just sign up with the Alliance Française for a nominal fee of 15 euros a year and religiously attend the conversations circles, held twice a week.

It was at about this time, when he told me that the conversation circle meets about forty seconds from my home, that I considered getting the mallet for the first time. Why have I not been going there for months now? My brain needs some serious reshaping.

I've been writing quite a bit over the last year, on this blog but also on my homepage. I have never had a formal education on the subject of creative writing and remain mostly clueless about the inner workings of a good story. But I know one when I see one. Today it struck me again, harder than in a long time.

Dave Sedaris is an American in Paris who happily, and hilariously, shares his everyday trials and tribulations of the City of Lights. His latest story, a linguistic promenade, had me laugh so hard that I literally had to walk away from it for a moment to calm down. I recognized myself in the story – with two notable exceptions. First, I have not given up on French completely yet. Second, I don't go see doctors much and in the rare case I do, I make sure to wear presentable undergarments.

The piece also told me something about the composition of kafkaesque narrative. While talking about nothing in particular, random encounters, unrelated in space and time, are craftily woven together to create an effortlessly flowing, highly enjoyable read. The end is in the reader's head.

This Thursday, I'm going to Rome for a week. I'll keep my eyes and ears open for bizarre observations and unusual anecdotes that might later serve to illustrate my own peregrinations. I'll have to be careful who I talk to, though. The only thing I know to say in Italian is d'accordo.

Drinking wine in France is immensely satisfying. The selection is incredibly wide, the quality excellent once you know your way around, and prices are enticing. I always buy more than I can drink. My bikes have to share the basement with increasingly many bottles.

At the same time, bitter complaints can be heard about the hardships producers face because of rude weather, feeble consumers, low prices due to the bargaining power of gigantic grocery stores, and markets being eroded by imports from Argentina, Australia and South Africa. Not that I've ever seen foreign wines in a store, but that's a different question.

The situation is indeed dire for some. Bad wine does not sell. If you produce lousy quality, you're left with hectoliters of red piss in your cellars that you can't get rid of. Instead of letting the market reward the good and weed out the bad, the French ministry of agriculture pays winemakers handsomely to have excess wine distilled into ethanol.

This policy has come under strong fire from the European Union recently as they rightly see it as misguided. Ripping out poor vines to moderate supply is the advised solution instead. However, this policy does not find eager followers here. I wouldn't even be surprised to read about road blocks and strikes in protest.

I was VERY suprised, on the other hand, to read an article in L'Express detailing the problem as it is, presenting French wines as world class and in an enviable position, and denouncing mediocre producers for their failures. If your French won't let you understand the article you can at least go through the list of recommended wines, exquisite in their quality, mostly moderate in price, and almost entirely unknown to the grand public. A treasure trove for you to discover.

This weekend marked the return to normalcy of French society. Stores have unboarded their windows and people are ambling in the streets. Roads are clogged and parking is hard to get for those who need it. I can buy cheese again because La Crèmerie has reopened shop. Kids are sent to school. The two-month hiatus that is summer has come to an end.

Traditionally, on this back-to-school weekend French political parties hold their summer universities, gatherings in scenic places to chew the fat and soak up the last rays of sun before tinted office windows with block any exposure. Besides, the meetings also let the higher-ups discuss strategy, interact with party activists, and present their faces to the media and thus the public.

Le Monde, this most serious of newspapers, page after page of content with hardly an advertisement to repose the eyes of the weary reader, has been doing its duty to the fullest. Epic article follows epic article ruminating over every word that was uttered and withheld and the ramifications for France. I often find myself in my institute's breakroom sifting through the overabundance trying to skim the cream.

My pot is so full already that the planned entry in this blog has evolved into a lengthy essay I'll publish on my webpage soon. It's so exciting to watch what's going on now that the paralysis of summer has been lifted.

the alpe, once again

When I rode up l'Alpe d'Huez today, all the painting from the Tour stage a month and a half ago were still visible and legible. I was struck by the discrepancy in representation between different countries. Names of Spanish, French, Dutch and German riders (and even a very fitting "Quäl Dich, Du Sau") were written on the tarmac, but hardly any Italians or Americans were eternalized. I encountered Erik Zabel an order of magnitude more often than Floyd Landis - this on a climb that might have decided the Tour. I know for sure that many Americans visited the Alps to cheer their heros, even after Lance. Do they not know how to buy paint in France? And what about the Italians? They could have just brought it over in their Fiats.

Anyway, l'Alpe d'Huez was only the first challenge of my day. If one continues climbing instead of turning around at the Arivée du Tour de France one gets to the Col de Sarenne and to the base of les Deux Alpes on the other side. Or, to be precise, this is what happens if one climbs the right road. What I did, ignorant of the local topography, was pick the wrong road, a sustained effort that took me to the Lac Besson where the road ended. Very nice view into what looked like a 1500-meter hole surrounded by cliffs, but not really what I wanted.

A few minutes later, I was back at the Arivée and picked the alternative road, which did in fact turn out to be the old postal route over the Col de Sarenne. There were turns, a high-Alps panorama, dry and wet water crossings, and rudimentary pavement. It felt like mountain biking on 23-milimeter tires. The descent on the other side was of a different class. Good surface began about a kilometer down, and then the fun really started. I'm glad I didn't ride this up because the road drops about a solid K in only ten.

As it was, I was already toast when I got to the base of les Deux Alpes. I tested the first 200 meters but then wisdom prevailed. Another HC climb wouldn't have been possible. Easily possible at this point, even with the customary headwind, was the ride into Bourg d'Oisans, downhill for the most part. Seven kilometers farther, I got to the place where my car was parked, and gladly traded bicycle for motorized tetracycle because I'd had enough of the pounding wind by then.

Life was better half an hour later when I sat in Vizille refueling on a delicious Italian ice cream sundae. So what if they forgot the paint?

"Quäl Dich, Du Sau", which can be translated with "Suffer, Asshole", is what Udo Böltz famously advised Jan Ullrich when the young German was about to lose the 1997 Tour in the Vosges mountains. Wiser words have never been yelled at a cyclist.