Two topics get people worked up around here. There's the weather, and there's public transport. There's always something to bitch about. I walk to work and most days that's just fine. I don't get stuck in snow or soaked, and I don't freeze to death. When I take the tube on weekends, it doesn't always – because of "planned engineering works" – take me where I want to go, but it gets me around in comfort and with speed. I entertain the notion that all the complaining is just social grease, to give people something to talk about.

Today, as I sat in The Eagle for a lunch of sausage and mash washed down with a pint of DNale, I reexamined my view. I was in Cambridge for the day to connect with two guys there who are in the same trade as me, to learn from them and share some tricks. Getting there hadn't been so easy.

I had started my journey at eight at West Brompton – or rather, I had tried. I got down to the platform, read, Next Train in 7 Minutes, and started yelling silently at the London Underground customer service representative that had taken residence in my head for the occasion: "Seven minutes? During rush hour? You can't be serious." Then the train came, the proverbial can of sardines. The doors opened, there was some shuffling, then they closed again. I was still on the platform. The next train was only two minutes away, but hope was misplaced. It was another can of sardines, and I stayed behind again. I stomped off in aggravation, annoyed at being left behind, annoyed at having been charged two quid for the pleasure, wondering how people endure this on a daily basis, and dashed for Earl's Court. My train from King's Cross wouldn't wait.

Once there, under the wonderful glass-mesh canopy of the new extension, I wrangled with a machine. I had bought my ticket online. To print it, I had to not only insert my credit card but also enter a litany of letters and numbers that had been communicated to me during the purchase. Why is my credit card not enough, especially if I have a booking for that day? Is this for my own benefit? Is this is to prevent someone stealing my credit card and then going to all the train stations in London every morning to see if any of the machines print a ticket out for him to go somewhere he doesn't want to go? Or is it just a design flaw?

English railroads are of course notorious for design flaws. There's the idiotic warning sign about doors closing up to 30 seconds before departure. 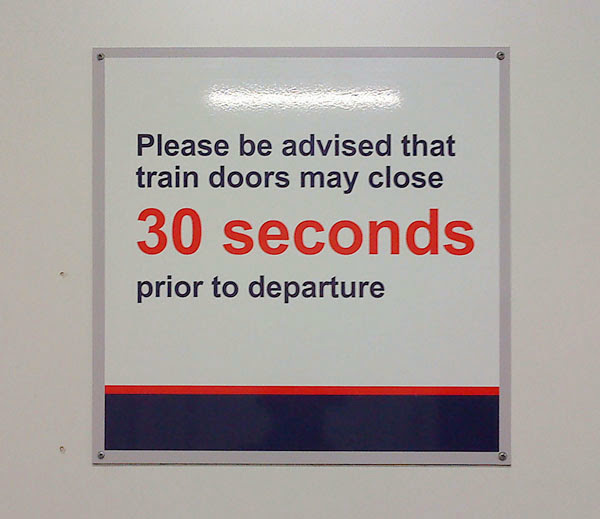 All this really says is that the train might not depart for up to 30 seconds after the doors close. No passenger could give a rat's ass about this, as long as the doors don't close before the scheduled departure time and arrival is on time. My arrival in Cambridge, by the way, was ten minutes late. This made me miss a bus and be late for my first appointment, but that's just a side note. This post is about trains and about flaws.

My favorite design flaw is on each door of First Great Western trains that periodically take me into the Oxfordshire countryside for experiments. These doors don't have handles on the inside. To open them, a sign (always too dark for me to get a good picture of it but the story is on the web) instructs you to

If you've never seen this, you will think this is a joke, but it's not. The handle on the outside is so far down that it requires certain acrobatic skill to reach. Trains thus pull into a station with an arm dangling from each door. There's nothing to add to this.

Except maybe: The train back to London was canceled, some problem with the couplings between two half trains to be mated for the journey. We were diverted to another train. Overhead, an announcement: "Passengers to London please board now. The train is about to depart." At that time, the door locks were still engaged and we were standing in the rain. There were no curses or gasps. Bemused looks were vastly outnumbered by stoic immobility. This is England.

We got to London eventually. Ignoring the social compact of the land that stipulates standing back and apologizing whatever happens, I pushed into a Piccadilly line train that was at capacity already. The PA system buzzed about the Victoria line, which was largely shut down after a creative engineer poured fast-setting concrete into a control room. This was initially announced as flooding, giving people something familiar to talk about. It's been raining a lot lately.

Posted by Andreas Förster at 1:13 AM 0 comments
Labels: collected moanings

Sometime in 1999, after the sun had bleached all the wildflowers from even the highest slopes, I ran up Mount Timpanogos for the second time. Given that Mt. Timpanogos is the second tallest peak of the Wasatch Range and I'm not completely mad, it's not quite correct to speak of running. But it felt like it. The day hike is long and relentless and it seemed as if we never stopped.

I had done the same hike a year earlier, freshly arrived in the wilderness of Utah and rather clueless. A bunch of Mormons had taken me on, friendly fellows eager to share their way of life. That day, their way of life included sandals up to nearly 12,000 feet, flying down I-15 in the bed of a pickup truck, and root beer floats. I can't say anymore which was worst. The days back then were so full of novelty that each one felt like a week, and stimuli piled up without much processing.

The second summer, I was with international students, my company for the next five years. I remember Luis who had just purchased a camera from a pawn shop. This was before everyone defaulted to eBay. The camera was a Canon AE-1 Program, a classic by some accounts. To me it just looked beautiful, features pared down to the essential, no faff, just a few knobs and buttons and a good lens.

I envied Luis his camera. As it often is with this feeling, it wasn't rationally explainable. But I wanted one. I think I went to pawn shops myself once or twice, but I wasn't lucky. Then I got distracted and when I looked again, a Nikon appeared on my radar that was bigger, clunkier and arguably more powerful. I loved it, but I never forgot about the AE-1 P.

The Nikon is long gone, but my desire has remained. So the other day in Munich when I found myself in front of a used camera dealer, I hit it hard. I walked out with a little dream come true. 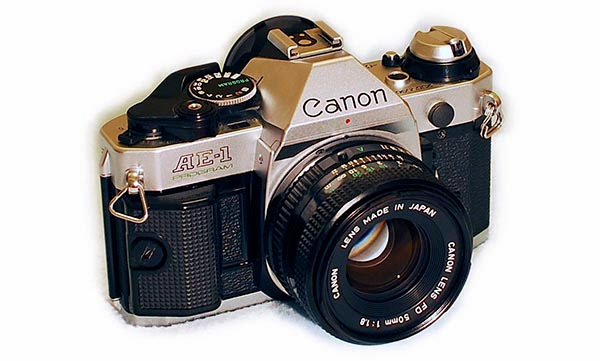 Now the question is what to do with it. I've bought some Ilford film. That was easy. Black-and-white is the only option. I can probably use the darkroom at Imperial. But what to shoot?

That's actually easy too. My fascination for dereliction, industrial decline and corroding steel can probably be married successfully to black-and-white photography. The walk I did a while ago and only now managed to document, illustrates what I mean – even though on that particular walk, color was better for most photos.

Ever since this blog went into hibernation – or, more properly, given the second to last post before nothing happened for a long time, into shutdown – in October, I was wondering if and how this blog would restart. I don't have an answer. In any case, this opening sentence sounds excessively grand. I didn't wonder much about it at all. When I did, Syria popped into my mind. Around Christmas, I almost sat down and punched some of the thoughts that kept rolling around my head into the MacBook that was traveling with me. But then the snow was glistening fresh from the trees of the Black Forest and Flucha wanted to go on a walk into the white void, and what difference would my words make anyway? The world will keep turning no matter, grinding remorselessly, shredding to pitiful bits the people that were, moments ago, living their lives peacefully and not asking for much. My shock and exasperation are irrelevant. They find no release.

My words make a difference only to myself. I've kept the blog for eight years now, mostly to have flag posts for memory when my brain isn't enough. I can go back, read a post from way back, recall what triggered it and oftentimes closely related events, encounters, even feelings. Moonwalking with Einstein, quickly read over Christmas and since recommended to anyone who'd listen, builds entirely on the concept of memorizing by anchoring, of making little things big to make them memorable. Reviewing the book was another thought I had of how to restart the blog.

I could also write about an almost perfect Christmas, a week with Flucha in the snowy woods, the traditions that were started last year and diligently followed this year. The Christmas meal alone would be worth a post but then it did so last year already and didn't get one. Let's call it another new tradition.

In the end I have nothing to restart this blog with because I'm not sure I want to restart it. But a new year has begun and just emptying the book bar on the side without writing anything at all felt a bit silly. So there you go, it's just housekeeping.