Cycling in California tends to crack (no pun intended initially) me up.  I can't see why you would do it.  California is basically one big freeway interspersed with shopping mall parking lots and residential developments' dead ends.  It doesn't look as if riding around on skinny tires connected by a few pounds of carbon were fun in the parts of the state I have seen

Yesterday, I spend the night and a few hours on either side of it in San Francisco, one of the epicenters of cool, a hotbed of political correctness and the green conscience of the United States.  At Old Navy, you can't even get a plastic bag anymore.  Never mind that San Francisco has what must surely count as the world's steepest urban roads and that it is part of car-horny California, I expected to see a few cyclists.

More than that, there were plenty.  Boris-bike stations dot the city (though luckily there's no Boris) and there are rental outfits for tourists all along the waterfront.  The train I took out of town towards Stanford this afternoon had bike parking inside the station, accessible only to those with a valid ticket as a practical measure of theft prevention.

All good? In the train I was on, there was an advertisement for a bike challenge, illustrated with a small pack of riders on a road by the ocean and a lineup of retired athletes below. 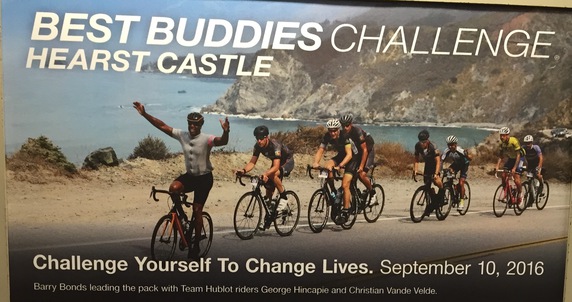 At first glance, this looked like one of those charity rides popular all across the US where you can combine something you love to do (ride a bicycle along a beautiful course in this case) with something others hate to do (give you the money you need to raise to participate in said ride).  At second glance, it's a blatant promotion of the use of illegal, performance-enhancing drugs.

Do you see the three names headlining the ride? Barry Bonds is notorious for turning "the cream" and "the clear" into 73 home runs in 2001 and never living up to the truth of it.  George Hincapie and Christian Vande Velde were keen consumers and beneficiaries of cycling's favorite drug (EPO) over many years while busting their asses for Lance Armstrong – who has somehow fallen out of favor with Americans since his tearful admission of transgressions that everyone had been sure about for years.  The Big Buddy Challenge thus uses three high-profile drug users to draw in the crowds.

Looking at the advertisement for the Best Buddies Challenge, I wonder whether Armstrong wasn't invited or whether he couldn't show because of scheduling conflicts.  He would have fit wonderfully.  I also wonder why Pepsi, Chevron and Cannondale support this event and thereby promote drug use.  Maybe Pepsi and Chevron didn't do their research, but Cannondale should know.  The bike builder sponsored a professional cycling time during the dark years of the late nineties and early 2000s when everyone did drugs and they sponsor one now.  Shouldn't they try as hard as possible to show that cycling is clean now? Or maybe it isn't, at least in California.