To me, the term bank holiday always had a slightly absurd ring to it.  I understand Christmas and Easter, First of May and Independence Day.  Even Pioneer Day.  Why not commemorate the arrival of the first settlers in Utah, celebrate the delusion that turned a desert valley green?  But what is is about banks?  What have they done to deserve not just one but three holidays?  There's one early in May, a second one late in May and finally one at the end of August.  That one's popularly known as late summer bank holiday.

I'm sitting on a bus into town, on the upper deck but not in the first row.  There's room, but there's no point.  There's nothing to see.  Water washes down the front window in a flood, and only the driver downstairs has wipers.  It is August, but it doesn't feel like summer.

Over the last couple of weeks, I started listening to 2fm, an Irish pop station.  My stay in the Republic a few weeks ago got me into it.  It was the station we were listening to in the car.  Back in in London I started listening to it in the hope of catching the Irish farmers' road safety appeal again, to give my travel piece the authenticity that comes with getting detail right.  When this wasn't happening, I stuck around for the voices.  The Irish have their own way of speaking English, and it's very pleasing to my ears.  There's also a dash of disconnect that gives drab programs spice.  Words and meaning have different trajectories sometimes.  There was talk about the Rose of Tralee and much time spent on the hurling scores.  It was all done in flawless English, but I could make neither heads nor tails.  It's like a different country.

As I'm getting closer to town, the bus gets fuller, rescuing the unprepared from shelters by the road.  It's still raining.  The queues into the Natural History Museum are long and frayed like old rope.  The weather's wearing good manners thin.  It looks as if the most determined will get to see the dinosaurs first.

Last week there was a giveaway on 2fm that didn't seem quite right.  If you've turned the heat on this week, the radio host tempted, give us a call and tell us the story.  You could win a full tank of heating oil.  This was in August.  A woman called and said her living room was arctic.  It wasn't a joke.  Two days ago, Radio 4 reported Northern Ireland's overnight low with considerable incredulity.  It was -2°C.

The bus's side windows remain largely clear.  Outside, tourists scuttle through the dreariness of a day with no hope.  Traffic is denser than it should be on a public holiday.  The driver is not in a good mood.  He's honking his way through the jam with considerable irritation.

The seats in the front row are all taken now.  You can't visit London and not sit up front at least once.  It's part of the experience.  I hear American, Spanish and French voices.  The paths in Hyde Park glisten.  A few people walk colorful umbrellas.  Speakers' Corners is abandoned.  This is not a day to be outside.  I leave the bus at Oxford St.  The big Metro Bank, a tasteless aggregation of bright red and equally bright blue, is doing good business.

Fat drops are hitting the metal box underneath my window into which the internet café on the ground floor rolls its shutters when it's open.  The rain comes down at a sharp angle.  In the middle of August, this doesn't surprise anyone in London.  Summer is relative.

Last weekend, I went away for four days, the closest to a summer vacation I will take this year.  My destination was Ireland.  I went in full possession of my senses.  A longer account of the time spent there will soon appear on my website.  Here, I want to revisit a topic that fascinated me the last time I was in Ireland, a few months ago.

Ireland has some of the most hilarious signage I've ever seen, what with no removal of rocks from the beach warnings or mind the step signs in Braille.  My friend had later sent me a find he had made while getting on the train in Dublin.  Under a printed "Days without accident" by the ticket barrier someone had proudly scrawled a big 1 – not exactly something I would advertise to my customers.

My recent trip to the west coast didn't offer the same rich pickings in that regard.  There was a post with three highly creative signs that, once you'd interpreted their unusual nature, might have warned of the dangers of the sea.  The bottom one agreed most with that interpretation.  Rather conventional, it showed a crossed-out diver about to hit the water.  The middle sign was harder to read, but became clear together with the one below.  What looks like deep pools, the sign seemed to say, might have submerged rocks protruding that are invisible from above.  If you jump you might hit them and get hurt.  That's a long message for one sign to convey.

The sign at the top showed a stick figure bodysurfing a mighty wave.  There seemed to be more excitement than danger in this sign, and I started to reassess my initial interpretation.  Maybe the signs weren't warnings at all but invitations?  Next to the post, a narrow trail led into the cliff.  At the end of it someone had installed a competition diving board on top of a proper concrete foundation.  A local business sponsored the operation.  It's name was on the diving board in capital letters.  There was no more talk of submerged rocks, though with the tide out they were clearly visible below.

The sign I liked best was leaning against a shopfront in Limerick.  J.T.Spratt's advertised washed roosters, ten kilograms for only €3.99.  The shop was closed and its shutters drawn.  I was left with many questions.  Was the business selling washed roosters or offering a washing service?  How do roosters react to being washed?  Why would you want your rooster washed in the first place? 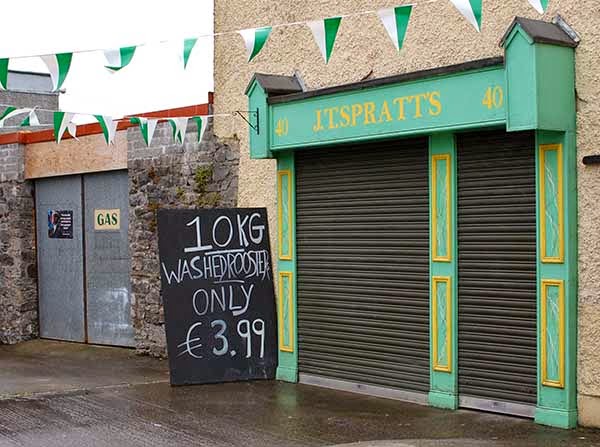 There was no one to answer these questions.  We continued our walk on King's Island, increasingly hastily, as heavy clouds bunched up above us.  Three days of summer had come to an end.  Before long, we hit the motorway east, hydroplaning back to Dublin through rainbows, sun and storm.

Posted by Andreas Förster at 1:52 PM 0 comments
Labels: far away

Yesterday after work I went up to Kensington High St to unwind – have a coffee maybe or a drink and spend insane for half a burlap sack of groceries at Whole Foods, every aspiring epicure's first port of call.  The air was hot after yet another week of un-English summer and with a protest march in full swing.  Fists, slogans and shouts rose where the usual disturbance is Lamborghinis accelerating out of the Royal Garden Hotel.

This is not a place for protests.  Nothing kills prime real estate like noise and masses of common people.  But it wasn't the first protest down that street.  Fridays are for marches, ever since Gaza exploded, the numbers of protesters swelling with the body count.  I had forgotten about this and now wondered whether I'd get through at all.  The T.K. Maxx on the other side of the street seemed a world away.

The protest wasn't a march anymore.  It had come to a halt as close to the Israeli embassy as possible, not threateningly close in other words but probably in shouting distance.  The embassy sits in Kensington Palace Gardens, together with many other embassies and assorted billionaires' mansions.  Lakshmi Mittal has a second home there, as does the Sultan of Brunei.  The street itself is owned by Her Majesty – who locks the gates when things might just get out of hand a little.  It was probably at the southern gate that the speeches were made, out of my sight but within earshot.

It was it this point that I wanted to intertwine my own thoughts on the conflict, but I find this impossible to do in a coherent and balanced way.  I would never broach the subject with Israeli friends.  It's easy to dismiss what's unacceptable when you're not always on the lookout for rockets, when you didn't grow up with suicide attacks.

But I have to write something because I don't understand.  When rooting out terror is your objective, killing children and bombing homes seems a questionable strategy.  If it weren't a hundred times more powerful, the response would mirror the terror that triggered it.  It could be read as a legitimization of the means, and the last thing Hamas needs is encouragement.  If you know the enemy takes civilians as shields, you can either not care about life or adapt your approach.

The protest didn't address these issues.  It didn't present solutions either.  The protest was a gathering of like-minded people, a demonstration of dissatisfaction with something out of control.  It was ill-focused and inconsequential and wonderfully epitomized by the Stop the War Coalition whose signs were everywhere.  I couldn't figure out whether they were a coalition to stop the war or whether the War Coalition needed stopping.

It easy to be a cynic.  There's incredible suffering all around.  Hotspots flare up periodically, if not regularly.  You can read, discuss, raise your passions, fight – live active democracy, if you will – and nothing will change.  Or you can close your eyes and enjoy the benefits of living in a democracy:  pretend that sun and the sales and your salary are all that matters.  I know what the right approach is, but conscious powerlessness is hard to endure.

I went into Uniqlo to buy pajamas.  The air conditioning was turned up so high that I almost froze solid.  Outside the fight continued.  Ill-defined fundraisers sold Palestinian flags, sweatshop-made somewhere in Asia, for five quid.  Socialist workers paraded placards that mostly advertised themselves.  The call for the death of Israel was verbal only, from a man with a megaphone whose accent clearly identified him as a disinterested party.  He didn't draw a crowd.