Sometimes I think a smartphone would make my life easier, keeping information at my fingertips at all times.  Sometimes information is all I need.  Monday morning, for example, yesterday, to be precise.  I found myself in a comfortable chair at a table with an enviable view, in front of me a delightfully presented breakfast.  It could have been so much better.

It would have been better, had I known the departure time of my flight back to London before setting off to the airport.  Had I known that, I would have still been in bed by the time thoughts about non-existing smartphones and breakfasts soon to vanish started swirling around my head.  It was not even seven; I was two hours early.

Two and a half days before that, I had arrived in Dublin and picked up a car in a convoluted procedure that might have owed something to the city's experience in the bubble before the recent bust.  My credit card was leveraged 40 times the rental value, with promises that I'd be a happy man when the chips were counted three days hence.  It was a frightening sum to sign over, however temporarily.

The most striking thing on the drive into town were the traffic lights.  Every single one was red, an engineering marvel for sure, an accomplishment not unlike free traffic flow throughout, but diametrically opposed in its effect.  Getting to my friend's house took three times longer than Aunt Google had promised.

Driving in the Pale the next two days showed traffic organization to be serious problem in Ireland.  Road signage is exceptionally poor.  Often, it is absent entirely and one has to guess directions.  Kids might not remember, but without a telephone of recent incarnation tethered to a satellite, this is difficult.  After encountering a sign for Wicklow where we were headed on Saturday, there were half a dozen intersections where it didn't feature.  I picked turns with intuition as my only guide.

At other times, signs were ambiguous or outright misleading.  On the road back from the Wicklow Mountains, after a hike up what can only be described as a hill with aspirations – dark, brooding and substantially more desolate than its height warranted – there were no signs for Dublin at all.  I understand that all roads in Ireland lead there eventually, but a clueless tourist would appreciate a bit more orientation.  Every exit advertised a local place name and An Lár, a phrase I had interpreted as Gaelic for city center on my drive from the airport the night before when I missed a postcard-sized sign with the same five letters and gone wrong for the first time.

After a dozen An Lárs, with a toll road into hostile territory looming ahead, we couldn't avoid getting off the motorway.  No idea where we were, but we had widely overshot Dublin without ever seeing evidence of its existence from the car.  It is possible that An Lár doesn't refer to generic city centers but only to Dublin's.  How would I know?  Returning from a day out on bikes the next day, things went better until a tunnel to the port was announced and a toll plaza threatened with fees to pay.  There was a road around it, the road downtown that we were not only after but already on, but it was perfectly camouflaged and it took the courage of the desperate to take it.

It was at this point that I came up with a theory.  I was reminded of Iceland where farm gates all over have to remain open to give free passage to huldufólk, elves whose traditional life and charitable business must not be impeded.  Ireland has leprechauns, but they are not considered unequivocally good.  Maybe the road sign confusion is meant to send them astray.  Alternatively, it could be designed to bamboozle tourists like me.  Most likely, it's simply negligence.

The most outrageous signs weren't road signs at all.  In Bray, a quiet place by the sea that avoids most of the traps English seaside towns inevitably fall into, there were stern warnings against the removal of stones from the beach.  Usually, towns by the sea advertise their fine sand.  Bray is proud and possessive of its vast expanse of pebbles and rocks, the sand buried safely underneath. 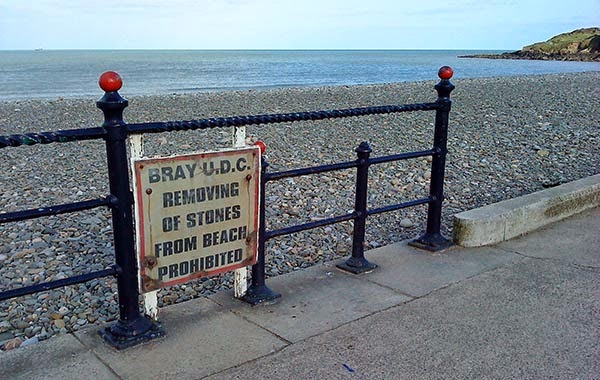 On Sunday, we went mountain biking.  We rented hard tails so fresh they still smelled of paint and lungbusted our way up a fire road that spilled us onto a system of trails engineered into the hill by someone with a fine touch for such things.  The trails were single track for the most part, closed to hikers and to be ridden in one direction only.  The climb was a pain, but the hour-long downhill – technical, rocky, twisty and so tight in parts that my shoulder still hurts from grazing trees – was epic.

In the lobby to the trailhead café was a bright yellow Mind the step sign with an explicit pictogram and Braille dots underneath.  My senses blunted by what we had experienced so far, the idiocy took a moment to register.  But unless there is an internationally agreed standard for where to place warning signs for the blind, Braille isn't of much use when the only cue is visual.

My friend attempted a second lap after our pit stop; I only made it up the fire road and decided to call it a day.  Years of long-distance running have atrophied my leg muscles to strings.  There was nothing left to do the downhill safely.  Not much had returned the next morning, which is why was happy to sit and have breakfast after walking, painful walking, through airport security and then towards my gate.  A break was a good way to start the day.  Smartphones be damned.

Posted by Andreas Förster at 11:36 PM 0 comments
Labels: far away

The previous post was rather positive and cheerful, much to my surprise.  It took me a while to recover from that.  The post did not exactly mirror my state of mind in the hours leading up to the delivery of the oven and during its installation.  I feared the worst.  I don't expect anything good when it comes to workmen, repairs, or anything to do with building infrastructure.  Things are oftentimes not done as I would expect them or in ways that make sense to me.

Take my place of work as an example.  The lifts are regularly out of order, as if they were there to provide backup for the stairs.  Steam leaks that take down heating, the hot water supply and sterilization facilities occur regularly.  At least once a month, there's a building-wide email warning of an impending emergency steam shut-down so another leak can be patched.  It would certainly be better and in the long run cheaper to install a new reliable system instead of patching the old one again and again, only for new leaks to break open only weeks later, but no one seems to take this option into consideration.

That is because doing it right is not how it's done here.  Making things work is usually the goal, fudging things to arrive at a temporary solution, to give the appearance of a solution, in other words.  Most external building work is done with a brush and a bucket of thick paint.  Coat after coat is applied until the paint itself provides structural stability while the walls below are rotting away.  Indoors, duct tape, glue and putty play similar roles.

I expected the oven business to go along those lines, and initially it did.  When the technician unpacked the appliance, the first thing to tumble from the box was a handle that had broken off from the oven door.  That's how the thing had been delivered.  Behind the door were a number of trays that made sense and various implements that didn't.  There were grips supposed to clip to the trays that I still haven't figured out how to use and a floppy piece of aluminum that looked as if it had fallen off somewhere.  The technician explained that it was a guard to keep the oven door open while using the grill.  This seemed strange to me.  Why would I want to keep the oven door open?  Was the idea to use the grill as a fireplace and warm the kitchen on cold winter days?  There was no good answer, but it didn't matter.  Even though both of us tried, we found no way of locking the guard in place.  It might have been too bent out of shape before its first use already.

It's entirely possible that the thing was bent out of shape by design.  It's not always easy to tell function from design.  I was reminded of this the other day when washing my hands at Imperial.  Washing your hands in the UK is often a journey into the dark past.  Many homes have separate faucets for hot and cold water.  They are called period fittings by estate agents as if functional moribundity were something to be proud of.  I've never understood the appeal.

In many homes, mine included, appeal plays no role in their continued existence.  It's simply a question of money.  If a fifty-year old faucet works, why replace it?  I understand this.  What I don't understand is why you would replace it with something equally obsolete.  This is what I observed at Imperial the other day:  Two faucets controlled one spout, but the hot and cold water weren't mixed.  Instead, two parallel streams of water exited the spout, scalding my index finger while chilling my thumb to the bone. 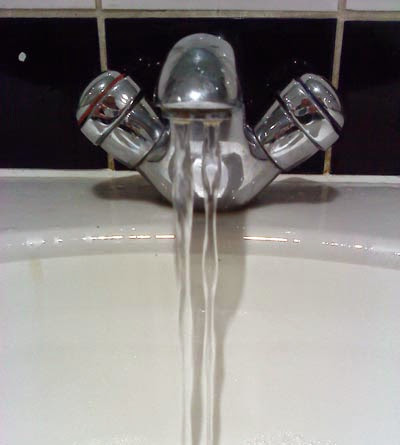 Three sets of questions are in order.

There is so much that I will never understand about this country.