In complete ignorance of the world around it, work goes on as usual, at least for the time being.  My last day at Imperial will be 30 June, but the imminence of that date is impossible to tell.  Left and right, people leave and arrive.  The composition of the lab changes; my lunch-mate was the latest casualty last week.  Only very few of those that were around when I arrived are still around.  I'm doing my work like in a bubble.

What else is there to do?  Scientific projects never end, even when the funding ends.  There are always more questions than answers, and every good answer triggers a load of questions if a thinking person gets the answer.  This is the way of science.  Somehow, the personal tends to play second fiddle to the professional, for whatever elusive reward.

Yesterday, I absconded from the lab with a 24-inch screen under my arm, unnoticed by security, unchallenged.  I waited five minutes on Queen's Gate until an unoccupied black cab came by and picked me up. Six minutes later I was at home. I swiped the chessboard off my desk and moved the few chess books and the openings encyclopedia that I've acquired over the last year and that now clutter its surface in dismal neglect aside and assembled scientific infrastructure in their place.  The tired MacBook, an old keyboard, a mouse (mighty by name but painful to use), and a few feet of cable to connect it all.  Then I went to bed.  It was not even ten o'clock.

My alarm raised me shortly after one.  Far away in Oxfordshire, the earlier shift was coming to an end.  Colleagues there were about to pack up their things and rest.  I had seven dark hours of forced wakefulness ahead of me, the twelfth session at the synchrotron in nine months and the first time of collecting from home.  I was curious about new crystals but also, on a more fundamental level, how data collection would go from home.

At the synchrotron, one sits outside the experimental hutch and, with the help of graphical user interfaces and movable cameras, adjusts experimental parameters, controls the sample-loading robot, positions the sample, and collects data.  When there's a problem, a beamline scientist is only a phone call away.  It shouldn't matter where exactly "outside the experimental hutch" is, as long as the network is fast enough. A coffee shop or my living room should do the trick just fine.

It turns out that the network was a bit of a problem.  Despite plugging the computer into the router to avoid wireless congestion, which often slows things down, the interface responded only slowly.  Measured 10 Mb/s is not enough for smooth sailing.  Buttons only slowly materialized on the remote screen.  Efficient clicking required anticipation and a memory of where each function was.  It was awkward but good enough to do the experiments.  Had I worked from my desk at work, I could have screened a few more crystals, but in the end I got I needed.

The experience was much unlike being at the synchrotron where time stands still, the light is always artificial, and a barely tolerable drone persists.  At home, you don't need a clock to tell the time.  At five, with audible though never irritating purrs, planes started descending into Heathrow.  Shortly before eight, the first bus stopped outside my house.  (The night buses must have passed by the stop.  I never heard the rattle of their accelerating engines.)  Then, at nine on a sunny Sunday morning, the justification for doing it at home:  the pleasure of falling into my own bed five minutes after the end of the shift. 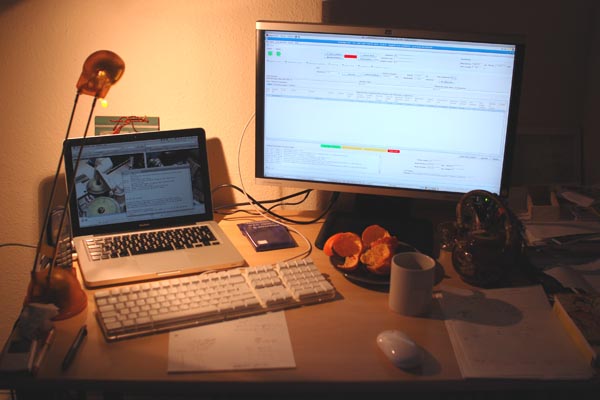 Towards the end of a long night

On Monday, in the lab and with the necessary computing and graphics power for data analysis, I will find out how much closer I've come to some sort of closure to the project I'm working on.  The structures that will rise from the data collected last night will certainly complement what I've found so far.  If all jells into a cohesive story, I'll have a strong case for employment in another lab in the future, and things will at last come to an end.