On the train to Portsmouth this morning, I started reading Nicholas Shakespeare's biography of Bruce Chatwin, one of my favorite writers, as percipient readers of this blog might recall.  The journey being short, I didn't get very far.  Chatwin is still at school.  But some defining characteristics have already been elaborated.  He's a collector of the unusual and happier alone out in the world that at home.

I don't know how much I will be able to identify with him, but I share his urge to see new places and the quest for the unknown.  On the other hand, my collector's drive is poorly developed and entirely immaterial, restricted to countries visited (32) and airports traveled through (76).  But I do like the unusual, quirkiness, efforts that have never seen the inside of a box.

Wherever I go, I seek out oddities rather than attraction.  Oftentimes, I walk in the opposite direction from the one indicated by the guidebook or dive into a dark alley just to see what's there.  I took this approach in Portsmouth and promptly got lost for an hour and a half.  In return, I saw a lot of grey and a lot of dilapidation, but nothing glorious, just general shabbiness.

Then I got to the Southsea neighborhood from where I felt it mandatory to travel to the Isle of Wight.  What's on the Isle, you might ask.  I couldn't give much of an answer.  Paul Theroux rode a train there during his royal encirculation, but I don't remember if he liked it.  For me, the island was only important as the endpoint of a ferry crossing of the Solent.  The journey was the real destination, a journey by Hovercraft as it happens.

Hovercraft are certainly on a special shelf in the cabinet of technical curiosities.  They are also amazingly fast.  Hovering, they are not impeded by the friction/drag/viscosity of water.  For three decades, there used to be a regular service across the English Channel.  A crossing took half an hour.  When I moved from Grenoble to London, this had been discontinued.  I crossed the Channel on a catamaran, which took 50 minutes.  The operator went out of business about a year later.  These days, service is safely back inside the box of tradition and takes two hours.

One has to travel to the Isle of Wight to experience hover travel in the UK.  The first thing I noticed was thunder.  The top speed of over 50 mph is achieved by 3 MW of air for lift and thrust.  A strategically placed fusion reactor would be most beneficial, but the boat has to make do with two pairs of diesel engines that are so loud I heard them before I even knew I was near the terminal.

When I got there, I noticed a second thing: there's no pier.  The craft hovers as easily over the pebbles of the beach as over water.  They just push a ladder to where it comes to rest.  You clamber in, the engines are thrown into gear and the boat (cause that's what it should be when you're crossing a waterway) roars, shudders, rises, turns and then takes off like a speedboat.  It takes waves rather smoothly, despite the idea that a simplified picture of the machine – world's largest outboarder strapped to a bouncy castle – gives, but the noise is furious. 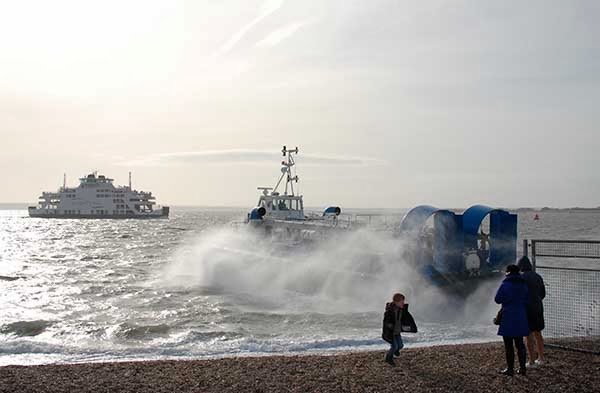 On the way home, my thoughts bounced around another technical oddity, not exactly related to hovercraft but also a way of getting across water without touching and highly unusual.  It's much to my dismay that I haven't collected a single transporter bridge in all my years of traveling.  Here's a list of those that exist with brief notes:

There's quite a bit to see left in this world.

Posted by Andreas Förster at 1:25 AM 0 comments
Labels: far away

Here comes the fifth installment of my "last year's books". I'm not obsessed enough to count, but I'm pretty sure I haven't reached 100 yet. Nevertheless, going back through old installments, I'm sometimes surprised at what I'm supposed to have read. Who knows how much gets lost in the time between I read a book and write down my thoughts on it?

Fourteen books, not bad for a year when I was often distracted and my mind rarely at home.

Because of homosexuals, those invidious sinners, Britain is drowning. That's what some nutter in politics was claiming, though it's unlikely to have garnered him votes. Despite his idiocy, he was right on the second part of his statement. The southwest of England and a bit of land called Wales have been battered by violent storms for weeks. Whenever the winds calmed, buckets of rain filled the void. Large parts of the country are disaster zones.

A bit of scenic railroad has fallen into the sea in Cornwall, and the Somerset Levels are a vast lake. The latter shouldn't surprise. The Levels are below sea level, land impoldered over centuries in gross contravention of divine purpose. Evangelic simpletons must see a connection. The more practically minded called for the dredging of rivers. But how could even the best-dredged river take water away from the Levels? It won't flow uphill to the sea.

Nearer to home, there are severe flood warnings, the meteorological equivalent of a red terror alert, in the Thames Valley. It was at this point that I started listening. I consider myself living in the Thames Valley. I go running by the river on weekends. It's not that far. What I heard when I opened my ears wasn't encouraging. Many names were foreign to me, but there was flooding near Teddington, which is one of my favorite walking destinations just upriver from Richmond, at the end of the District line. Teddington has a wonderfully intricate and ancient lock-and-weir complex designed to stop the twice-daily insurgency of the tidal river.

These days, the menace lurks upriver. With the wildest winter rains for 250 years washing into the Thames from a vast catchment, the river is expected to rise by inches every day. It's double jeopardy for London. The full moon brings spring tides, exceptional amounts of North Sea pushing up the estuary all the way to the lock at Teddington. The Thames Barrier, London's primary protector against the forces of the sea, has been closed 33 times since December, as much as during the first 17 years of its existence.

The curious bit about all this is that I could be excused for not noticing. London has been spared the worst excesses of nature. It rains almost every night, and two weeks ago something that could almost be called a tornado ripped through the market on North End Road and scattered bowls and produce all over the street, but the days are relatively dry. My lunchtime runs at work, shockingly numerous for no particular reason, have been held up by rain only once. Hyde Park is a bog, but the footpaths are mostly dry.

It's hard to comprehend why London is an entity apart meteorologically, a dry city rising mightily from inundated fields, but one can't say it's inconsistent. The city is already culturally and economically apart from the rest of the country. Everyone's talking about the upcoming referendum on Scottish independence. For London, independence would make much more sense. Crazier things have been suggested.

Posted by Andreas Förster at 9:08 PM 0 comments
Labels: in the hood, pointless musings

Last night, tube drivers walked off their mobile places of work, leaving the city increasingly immobile as a result. This is how I heard it on the news this morning. However, when I walked to work, I didn't see anything out of the ordinary. Lillie Road was clogged as always but traffic wasn't immoderate further into town, and there weren't any more pedestrians on the sidewalks than usually. For a while, I thought I had got my dates messed up.

It wasn't supposed to be any old strike either. Drivers belonging to the two biggest unions would jointly walk out for 48 hours, longer than the usual but infrequent 24-hour strikes. Thinking back to my two years in France, I can't even remember a strike that went on for more than a day. This shows how working conditions have improved, but takes away from the heroism this story could contain.

Back in France, the only effect strikes, even the infamous general ones, had on me was an obligation to sign in at work, to prove that I was there and deserved to get paid for the day. It didn't exactly feel like crossing a picket line, but somehow a sense of moral failure was contained in this furtive signature.

Today, I didn't have to sign in. Many commuters, none of them on strike, would have been unable to do so. Transport for London had warned of severe disruptions to their services (though they also boasted of Olympic volunteers flown in from 2012 to keep things moving) and advised people to work from home. The labs at Imperial were consequently rather quiet. That the canteen was heaving doesn't fit the narrative, but there you go.

The strike, by the way, was about the proposed closure of ticket offices in most tube stations. The unions are worried about job losses while also flogging their favorite slogan - this will make traveling less safe. Proponents of the changes claim that ticket office staff will be redeployed to where they're needed, to provide advice and assistance by the entrance barriers and the ticket machines. No stations will be left without staff.

This sounds reasonably to me. Locals don't use ticket offices. Oyster cards are recharged on machines or online. And for tourists to ask questions, it's easier to approach someone standing there with a recognizable uniform and a big smile than leaning into a hole in the wall with a thick glass window making communication difficult.

From what I can tell, most stations already operate like this. My mom, for example, once complained jokingly that she tried to top up her travel card, but even before she could set the language of the machine to German, an attendant had walked over, figured out what she wanted to do and done it for her. It was a bit frustrating because she wanted to figure it out herself, but this is the kind of service that makes London such an easy city to navigate.

No matter, the strike was on. On the way back home tonight, I walked by the shuttered entrance to Gloucester Road tube station. No one was working there and nothing moving. That gave me an idea. I hopped into the Waitrose next door, not needing much but with some curiosity. The shop is usually full with people on their way from work and is a bit of a zoo. The aisles are bumper car tracks and waiting time at the checkout is long. Tonight it was rather pleasant, as if the unions had decided to improve the shopping experience of a clientele that's rather removed from the concept of militant industrial action. The walk-out will continue tomorrow.